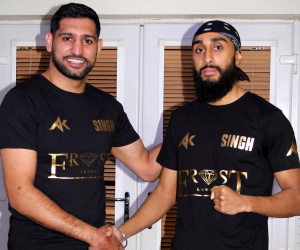 Khan is advising the 26-year-old from Liverpool, who is expected to make his highly anticipated professional debut this summer.

Light-flyweight Singh began his amateur boxing career relatively late at 18, but with his natural talent he quickly progressed through the ranks in just 14 fights.

Amir Khan v Kell Brook - Will it? Won't it? Do we even want it anymore?

He’s already made history as the first Singh to ever win the England Boxing National Championship in 2018 and incredibly won the title again the following year.

Singh’s undoubted potential also caught the eye of former World Heavyweight Champion David Haye and trainer Ruben Tabares when he trained at the Hayemaker gym alongside Haye for many years.

Not only does the boxing world highly rate him, but he also has a big celebrity following, including magician Dynamo, rapper Tinie Tempah, WWE Champion Jinder Mahal, singer Jay Sean and Bollywood signer and music producer Maj Musik.

Singh believes that this will be a turning point for boxing’s popularity in the Sikh community and his success will inspire widespread Punjabi participation in the sport.

He said, “I’m really excited for what the future holds, having Amir behind me and creating something special legacy wise for the both of us being in one team! I've been working really hard for many months alongside Amir in Bolton.  I know there is a lot of pressure on me being Amir’s first and only fighter that he’s looking after, but I’m confident I will deliver on everything Amir believes and sees in me.  I really do think we can do something special together and we're thrilled to share this news with the world."

Khan is delighted to be working with Singh and know’s what it’s like to break down barriers. He said, “I’m so happy to working with Tal and I will be putting all my energy into taking him to the top and becoming the first ever Sikh world champion boxer.  He’s breaking down boundaries, just like I did when I became the first ever British-Pakistani world champion to open the doors for the Muslim community in boxing.  I see in him the dedication, mentality and focus to become a world champion.  I know what it takes to be a world champion and I see that in him.  So much so, that I believe in 10 fights he will be world class and ready to fight for a title.  My job is to take him to the top, if I didn’t believe in him I wouldn’t waste my time as I’m still a boxer myself, but with Tal I know he’s committed and dedicated to achieving his dream."

Khan also added that Singh features in one of the forthcoming episodes of the reality show Meet The Khans: Big in Bolton that starts on BBC3 next Monday.

Ted Cheeseman questions whether JJ Metcalf has found his level