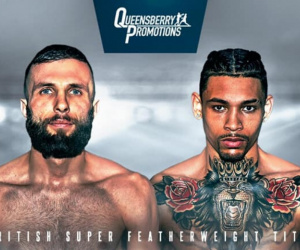 The British battle will take place behind closed doors at the BT Sport Studios in Stratford, televised live on BT Sport, as boxing finally returns with what is certain to be an exciting encounter between ‘The Apache’ and ‘The Lion’.

31-year-old Cacace has experienced 108 rounds as a professional and has been involved in four title fights. He has been taken to the 12-round distance twice during his eight-year-long pro career. Despite fellow Belfast boxer Carl Frampton hailing him as one of the hardest punchers he’s ever felt, Anto only has seven stoppages from 19 bouts.

Woodstock, 26, has a similar KO ratio at around 35%. He has experienced a quarter less rounds than Cacace, having had five fewer fights. He also has experienced four championship contests during his five-year career, but has only been the 12-round distance just once in his last fight.

Woodstock didn’t set foot inside a boxing gym until he was over 16-years-old yet compiled a decent record quickly, but never reached any dizzying heights.

His first test as a professional came against Paul Holt (6-3) when the pair clashed for the vacant Midlands Area super featherweight strap in 2017, which Woodstock won in the third round.

His first major test was when he had a life-and-death fight of the year contender with battle-hardened Craig Poxton (13-4) the same year winning a close fight on points to claim the WBO European title.

He lost that belt just a year later in his first defence when he had another fight of the candidate, this time with bitter rival Archie Sharp (13-0).

It was a thrilling war between the enemies, the pace was high, punches exchanged were plentiful, and entertainment was provided. Welling’s Sharp was the bigger man and landed the heavier, cleaner blows to win on points.

He bounced back with a win and a knockdown over eight rounds against low-level opponent Sergio Gonzalez (10-13-5) in March 2019, but tasted defeat again for a second time in the next fight when he was outclassed considerably by Zelfa Barrett (21-1).

He took a lot of punishment but still came forward throwing hands, right up to the final bell, proving worthy of the title ‘warrior’, but he was well beaten by ‘The Brown Flash’, who looked quite comfortable in there.

With just a Midlands Area belt and WBO European in his trophy cabinet, he hasn’t yet risen to the occasion when stepping up another level.

What he does do very well is provide value for money with his entertaining style, persistance, doggedness and jis heart of a lion.

A product of the Oliver Plunkett Gym in west Belfast, Anto was a sculpted into a fine amateur by Patsy McAllister and collected three Four Nation gold medals.

Now training in Brian Magee’s gym as a professional, he hasn’t had a smooth ride so far, which included a stint over in Philadelphia for almost a year, where he managed to have just one bout. On his return from the States in 2014 he signed with Cyclone Promotions which lasted  a little longer and was very fruitful, racking up a further five wins in just over a year, including an impressive Celtic title victory over Ronnie Clark (13-2-2).

Back under Pat Magee’s guidance and Brian Magee’s training regime (no relation), he bounced back from his very close defeat to Martin J Ward (17-0-2) to win the British super featherweight title in his last fight, dethroning unbeaten champion Sam Bowen (15-0) with his heavy hooks and accurate shots. Bowen was bleeding from the nose early and his face was badly swollen by the end.

Naturally gifted in talent and power, Carl Frampton has already recognised his “world-class ability” and was also quoted saying “he was the hardest puncher he knew”.

Expert reviews like that should be enough to tell you all there is to know, but Cacace is also a hungry fighter, and they are the most dangerous ones.

As I’ve just alluded to, Anthony Cacace calls himself a hungry fighter, with a wife and three children to support at home. He has entertained the idea of retirement more than once during his career as he has had more changes of management than most, coupled with contract issues and postponements, resulting in many months of dormancy.

His win over Bowen proved to be the turning point in his career, then it all came to a grinding halt due to the coronavirus pandemic. So now he finds himself back where he was, which is in need of money and hungry for his life as a boxer to continue again.

The necessity to win will be great for both fighters, but I believe so more for Anthony Cacace, who has proven himself at this level, whereas Lyon Woodstock hasn’t yet.

I believe the champion will prevail on points, but I wouldn’t rule out a late stoppage either. Woodstock has never been stopped and he is one tough cookie, but maybe Cacace could be the man to do it?