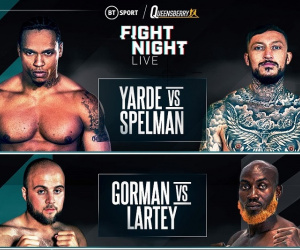 Yarde is looking for a win to set up a domestic showdown with Commonwealth king Lyndon Arthur, but Spelman has other ideas and is determined to fight fire with fire.

Londoner Yarde is former world title contender and Spelman is an ex-English champion. This warring pair are on different levels to each other, but 28-year-old Spelman from Scunthorpe is as tough as they come and has never been stopped. The only time he has ever been down is during the fast-paced, explosive Ultimate Boxxer tournament in 2018 when he reached the finals with overall winner Shakan Pitters.

It was the same man, Pitters, who relieved Spelman of his English championship in September last year when the pair fought in a thrilling fight at the York Hall on a Queensberry Promotions show. Spelman put Shakan under plenty of pressure during the 10-rounds, but the title did change hands that night as Pitters was awarded a unanimous points decision with scores of 97-93 from all three judges.

In his last fight, Dec extended Lyndon Arthur to the full 12-rounds just a few weeks ago on July 31 on another Queensberry show. Trained by Carl Greaves, Spelman lost via unanimous decision but was scored as close as 113-116 on one judge’s card.

Spelman struggled to get past the Commonwealth champion’s persistent, rangy jab but did apply constant pressure throughout. He had an extremely strong round five which ended with Arthur stuck in the corner eating his right hands. By round six, however, Dec’s face was badly battered with blood pouring freely from his nose. He still plodded forward, firing with everything he had for the entire fight.

Arthur could barely miss though and landed an unbelievable amount of jabs to Spelman’s head during the 36 minutes – you would expect Yarde to do the same but with more sustained damage.

Yarde’s one and only professional career defeat was when he jumped up a big leap in levels to face three-time world champion Sergey ‘Krusher’ Kovalev (34-4-1, 29KOs) in his own backyard in Russia. It took the Hackney hard-hitter five or six rounds to warm into the world title fight, barely winning a round for the first half of the contest.

In round eight, Yarde came on strong and was seconds away from stopping the Russian, now 37-years-old. Kopeysk’s Kovalev came back with a second wind and mistakenly thought he had won the fight in round 10, but it was in the 11th that Yarde walked onto a left hand and went down for the first time in his career and was subsequently stopped.

Having only been asked to go 51 rounds of a scheduled 134, having never gone past seven rounds, Yarde looked worn out by the championship rounds and was barely hanging in there. The world championship experience would have stood him in very good stead going forward and you could bet on him coming good again.

The Peacock Gym star, trained by Tunde Ajayi, has already bounced back with a second-round stoppage win in February this year.

The 29-year-old is aiming to win this contest to set up a showdown with Commonwealth titleholder Lyndon Arthur (17-0, 12KOs) next.

Both Yarde and Arthur are stylish boxers with a relaxed style and fast, heavy hands. With 18 knockouts from 19 victories, Yarde can boast a 90% KO ratio and 16 of those foes never made it past the midway point with him, 11 of the victims falling in rounds one and two. Only Dariusz Sek (28-6-3, 10KOs) and Tony Averlant (28-13-2, 5KOs) managed to get to the seventh round but were both down in the rounds preceding the stoppages.

Spelman sustained a lot of damage from Arthur and you can imagine he will incur the same fate when faced with the might of Yarde. With a higher success rate for finishing challengers, Yarde’s approaching assault on the intrepid Spelman may result in too much harm for him to make it to the final bell again, especially so soon after experiencing 12 hard rounds with Arthur.

With the fullest of respect given to Spelman – I have always been a big fan of him and trainer Carl Greaves – I do believe that Yarde could force a stoppage or retirement after round seven when the damage and devastation becomes too much.

‘The Beast’ will be fully incentivised to get one up on future rival Lyndon Arthur by making a statement with a stoppage.

This is the fight of the night that everyone is looking forward to the most!

Mark Heffron (25-1, 19KOs) wasn’t on the same level as his sole conqueror Liam Williams (22-2-1, 17KOs) when they fought in December 2012. His head was snapped back from the very first round of their British middleweight title fight until he was halted in the 10th. Heffron missed a lot of punches as Williams controlled the pace and distance behind an expert jab, throwing straight shots in threes and fours

Oldham’s ‘Kid Dynamite’ has since bounced back with four consecutive six-round wins, the first two were won on points, scored 60-54, the latter two via first-round knockouts.

So, the 28-year-old former WBC International titlist comes into his 27th contest with good momentum and a vaster experience behind him.

Denzel Bentley’s (13-0, 11KOs) flashy style, with his hands held low, means that he will likely catch a few from Heffron and any other opponent he ever faces. So far, nothing has fazed him in his career. His previous opponent, Mick Hall (15-3, 2KOs) caught him with a heavy right hand in the first round of their July fight, but it didn’t trouble the 25-year-old prospect one bit as he danced around, switched stance, showed off and cruised his way to sixth-round stoppage win after Hall was battered from post to post in the sixth stanza and retired before the seventh could start.

The Battersea boxer is a stylish, awkward, ruthless counter-puncher with a frightening 84% KO ratio. His heavy hands are thrown from his hips, which is extremely hard to react to as you can’t see them coming.

It’s an intriguing clash of styles, with Heffron very disciplined and sharp with very decent all-round boxing skills. He’s very orthodox and boxes behind his jab, whereas Bentley couldn’t be any more different. He doesn’t know what he’s going to do himself, which means it’s impossible for his opponents to know either.

Both boxers are bound to land, but whose shots will be the most effective? You could envisage Heffron winning the early rounds behind a sensible jab and tight guard, and racking up most of the rounds as the fight goes on, but it’s whether or not Bentley can land his damaging heavy hands cleanly to hurt Heffron and force a stoppage. It’s almost impossible to tell how the fight will play out until the first round is over.

Heffron’s vaster experience - already having gone to 10-rounds once - and very competent all-round ability could place him at a slight advantage to win, but Bentley’s explosive power and unpredictability and randomness could make a knockout win a possibility too. Williams showed that Heffron can be hurt, dropped and stopped, so Bentley will have that as his game plan.

It’s a real pick’em fight, which is why it’s so highly anticipated by the fans! The winner will take away the IBF European middleweight title and receive a lofty world ranking.

Each lost their last fights to the same person - Daniel Dubois. Gorman was down twice before his fifth-round stoppage and Lartey was down once in the fourth before the fight was waved off.

Gorman, a former WBC International Silver champion at just 24, will be seeking to put the domestic heavyweight division on notice that he is back in the fold and in the bidding for major titles once again.

Nathan Gorman has quick feet and fast hands for a heavyweight and lands with his left hook a lot. He moves his head well and likes to counter. Against  Dubois, he was floored in the second from two big rights but he got back up and bravely came forward to scrap it out with his opponent. After that, he stopped moving his head and was caught up in a war with 'DDD'. Lartey can relate, as they each traded off from the very first bell against each other.

Gotman is open to that big right hand, which Lartey could well land and cause an upset with. However, Gorman should be too skilled and too slick for Lartey, and should be able to win this contest on points - his previous three victories all went the distance. He might not have it all his own way though.

The vacant IBF European welterweight championship will be on the line for English champion Ekow Essuman (13-0, 5KOs) when he goes in with the Frenchman Cedrick Peynaud (8-7-3, 4KOs).

Parisian Peynaud took part in two epic contests against Connor Benn across 2017-18 where both men were put to the canvas and it represents an ideal test for Essuman, who is in the British title mix along with Benn and current champion Chris Jenkins.

The 34-year-old Frenchman is the defending champion of the belt previously held by Johnny Garton and Larry Ekundayo. However, he lost his last contest to unbeaten Anass Messaoudi (8-0, 6KOs) for the BeNeLux welterweight title.

He hasn't put a foot wrong yet in his approaching four-year-long career and there's no reason to believe he won't continue to box clever and win this contest too. Three of his last five wins have finished early, so there's a possibility he could win via knockout, probably after round five.

Managed by headliner Yarde's trainer, Tunde Ajayi, Mohammad Bilal Ali (4-0, 1KO) is currently unbeaten over amateur and pro, although he has only experienced three amateur bouts and four professional fights. In his amateur debut, he defeated a Haringey Box Cup champion, proving he has a natural ability.

His opponent is yet to be named.

Also managed by Tunde Ajayi, unbeaten featherweight Amin Jahanzeb (7-0, 2KOs) is one of Frank Warren's newest signings. Trained by Haroon Headley, the Yorkshireman had 19 amateur fights, winning 15 of them along with a Senior Development national title. Over half of his wins came by knockout. The 24-year-old from Bradford joined Queensberry Promotions during lockdown in May and will be keen to put on an impressive performance in his promotional debut.

Yet another one of Tyson Fury's cousins, Frankham is a former England amateur representative, who won 31 from 37 fights, and was a four-time national champion. Trained by Wayne Batten in Southampton, Frankham is also the cousin of legendary British light-heavyweight champion 'Gypsy' Johnny Frankham. It was heavyweight champion of the world Tyson Fury who gave Frankham a glowing endorsement that led to Frank Warren signing contracts with the youngster. 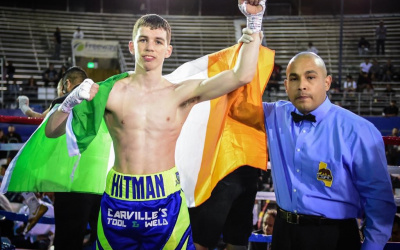 Stevie McKenna shares sparring stories with rival Ryan Garcia: "He was supposed to do six rounds but jumped out after four after taking beatdown"