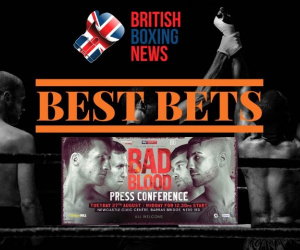 With less than half a dozen boxing events on this weekend in the UK, all eyes will be firmly fixed on the Sky Sports show on Saturday night (October 19).

There's three fantastic 50-50 fights topping the bill that will be extremely good viewing, backed up by around six up-and-coming prospects, and there's heavyweight action, too.

Here's a betting preview of the Matchroom Boxing event:

Robbie Davies Jr (19-1 13KO) and Lewis Ritson (19-1 12KO) clash this weekend in Newcastle in one of the most highly-anticipated domestic fights this year. Both men are at a very similar stage in their respective careers and both will know that a win here, could launch them into the mix for a world title in 2020.

From a betting perspective, the fight is so closely matched with the home fighter, Ritson, the marginal 5/6 favourite. All through the build-up, the general opinion has been that Davies Jr is the superior boxer and Lewis Ritson is the bigger puncher. Whilst the logic behind this train of thought is not far wrong, there are plenty of other factors that will come into play on Saturday night.

Crucially, Davies Jr has campaigned at 140lbs for his entire career, whilst this will be the first real test for Ritson in his new weight division. Although he was a feared puncher at 135lbs, history tells us that not all fighters carry their power up through the weight classes. However, if he does bring the power up, it could spell danger for Davies Jr who has been stopped and hurt before in previous fights against lesser opposition than Lewis Ritson. On the other side of that, in Ritson’s biggest fight, to date, against Franseco Patera, he was comprehensively out-boxed over twelve rounds and should he allow Davies Jr to settle into his rhythm it could be a long, frustrating night for the Newcastle man.

There is a lot riding on the fight and I expect neither fighter to take many risks, especially early on in the fight. There are simply too many variables to weigh up in this match up and it is really difficult to pick a winner in this fight with any real confidence. Therefore, the bet for us will be for the fight to go the distance @ EVENS which represents decent value in a fight, where very little splits the two fighters.

A fantastic main event is supported by a really competitive undercard and from a betting point a view, there is plenty to take a look at. The chief support between Ted Cheeseman (15-1-1 9KO) and Scott Fitzgerald (13-0 9KO) is another really close, competitive fight with the British Super Welterweight Title on the line. 'The Big Cheese', despite only being 24, is a solid domestic level fighter and has some really good wins on his record. His sole defeat came at the hands of under rated European Champion, Sergio Garcia, where he was out-hustled over the 12-round distance.

‘The Mad Man’ Fitzgerald on the other hand, enters the ring on the back of really impressive performance against Anthony Fowler in March and is quickly becoming one of the most popular fighters in the country. Despite being a very talented boxer, Fitzgerald is an enigmatic character and it sometimes difficult to predict what version of ‘The Mad Man’ will enter the ring on fight night, which is one of the reasons this fight is so difficult to predict.

From what we have seen so far, Fitzgerald is the more naturally gifted of the two and if both men enter the ring at 100%, the chances are Fitzgerald will emerge victorious. We can expect Cheeseman to set a relentless pace and as a proud British Champion, he won’t be prepared to let the belt go lightly. Despite his gutsy attitude and relentless work rate, his lack of defence and sometimes disregard for his opponents’ power, could be his undoing on Saturday night. Fitzgerald punches very hard for the weight and as we have seen in past fights, Cheeseman can be easy to find and its hard to see Fitzgerald letting him off the hook, like some of his previous opponents have.

The bet for us here will be Fitzgerald to win between 7-12 @ 4/1. Although there is no guarantee the best Fitzgerald will turn up on Saturday night, he has looked in great form during fight week and his style and power may be too much for Cheeseman to withstand over the twelve-round distance.

Another eye-catching fight on the undercard is between undefeated local lad Lawrence Osueke (9-0 1KO) and Ricky Summers (16-2 5KO) in the light-heavyweight division. Osueke, was a very good amateur and has made a low-key transition to the professional ranks. He has only the one stoppage in nine contests and faces a big step up against Summers, who fought for a British title two years ago.

The bookmakers have Osueke as the favourite here, but there is no evidence in his previous outings to suggest you could back him at a short price, with any confidence. Summers, is a seasoned campaigner and has proved himself at a much higher level than Osueke, as it stands. With neither fighter seemingly possessing fight changing power, this fight seems destined to go the distance which won’t be a problem for Summers but will be new territory for Osueke, who has only fought in one eight rounder, to this point.

There is definite value in taking a chance on Ricky Summer’s here this weekend, although he is travelling into his opponents ‘back yard’ and will have to overcome everything that brings, he has a real live chance of upsetting the odds here. The bet for us will be Ricky Summers to win on points @ 9/2 which looks very generous.

Although the tips are decent value on their own, if you wish to combine the three selections above, the accumulator pays around 45/1 and, as always, THESE TIPS ARE PROVIDED FOR ENTERTAINMENT ONLY. PLEASE GAMBLE RESPONSIBLY.