Bourke aims to be bolder if he beats Beech

Should he be emphatic, as he intends to be, in repelling the challenge of James Beech Jr on July 24, Chris Bourke plans to go against his more reserved nature and call out the British super bantamweight champion, Brad Foster.

Bourke defends his WBC International Silver title against the 12-1 Beech at the SSE Arena, Wembley in support of Joe Joyce taking on the formidable Carlos Takam for the WBO International and WBC Silver titles.

Even though Bourke, 26, acts and fights like a seasoned campaigner, his Wembley date will actually only take him to the early milestone of reaching double figures as a professional.

"I know... I've not even been a pro for three years yet," Bourke acknowledged. "I'm nearly 10-0 and I've won the Southern Area, beat the English champion and now I've got the WBC belt, which gets me up in the rankings."

The Streatham Sniper first jumped on the title trail with a points victory over the then also unbeaten Ramez Mahmood during last summer's lockdown series of shows before going in with the English champ Michael Ramabeletsa with the WBC strap at stake in December.

Ramabeletsa came with a reputation for knocking prospects off their pedestal, but had the tables turned on him when Bourke caught him flush in the second round and didn't let him off the hook.

Another tough challenge now looms with Beech jr making a challenge for his WBC title. The Midlander's only loss came in a close-run thing against Foster in the first UK boxing show after last year's first set of restrictions at the BT Sport studio.

Bourke reckons all the ingredients are there to cook up a crowd-pleasing spectacle.

"As long as I get the win, that's what matters, but I reckon it will be a good one because he brings it and I don't think he is ever in a dull fight. He comes forward, throws a lot of shots - and is there to be hit!

"He is 100 per cent a proper fighter and he gave Brad Foster a hard fight, I thought.

"He will try and bring it to me, so it will be down to me to show my skill and class and do what I need to do to get the win," continued Bourke, who insists winning is all that matters by whatever method.

"I'm gonna get the win and, if I get him hurt, I will get him out of there. He is a good fighter who can do everything well, so I have just got to focus on the win."

The product of the Peacock Gym knows this is a big opportunity for him to shine on a big stage and believes he needs to post a statement with his performance that demands a return ticket to the marquee cards.

"Exactly, you want to stand out, be the fight of the night and the one people are talking about afterwards. I feel like, for my weight, I hit hard and I just want to keep that going really.

"I want people to want to watch me so I want to be in exciting fights to get people interested.

"I'm not really a big talker, but when I am in the ring, that is where my fighting needs to do the talking for me."

But despite being more thoughtful than voluble, Bourke understands his voice needs to be heard if an enticing domestic clash between himself and the also multi-titled Foster is to be delivered by public demand.

Foster is soon to challenge Jason Cunningham for the European title to add to the British and Commonwealth belts already in his possession.

"Yeah, it will only make sense, won't it. Now he is fighting for the European there could be even more at stake for me. I think he will beat Cunningham, although I was surprised he beat (Gamal) Yafai.

"Once I get the win, depending on how I do, I will be a bit more vocal this time. I need to get people talking a bit more now."

And on the main event, Bourke cannot see past his former GB teammate Joyce having his arm raised in triumph, but reckons it might not be straightforward for him.

"I am looking forward to that because Takam brings it. I think that Joyce has just got too good a chin for someone like Takam, but I think he will be dangerous for three or four rounds before Joyce gets to him. Like he does with everyone else.

"He will walk him down and get him out of there at some point. It is a good fight and a lot of people are looking forward to it." 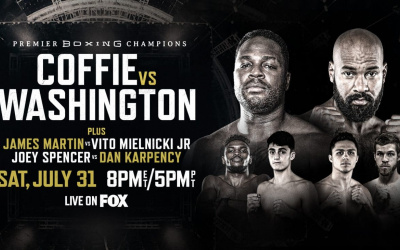