All the fight results from Daniel Dubois vs Ricardo Sneijders event

The six-fight event takes place behind closed doors at the Straford BT Sport Studios, from 7pm, directly after the conclusion of the FA Community Shield match between Arsenal and Liverpool.

Six Brits are in line to challenge for European titles

Check back here for all the live results as it happens:

Impressive performance yet again from David Adeleye. The 23-year-old breaks down the durable Phil Williams securing a third round stoppage to go 3-0.

Londoner Adeleye utilised his jab nicely to begin the contest. His opponent wasn't in the best shape but he took Daniel Dubois' sparring partner Dorin Krasmaru (3-0, 2KOs) the distance in his last fight and has only been stopped three times in almost 30 fights, so he is durable and tough.

Adeleye landed a nice right hook over the top of Williams' guard which he followed up with a right hook to the body. The dying seconds of the opening round saw Adeleye really turning up the pressure to land all manner of shots, a straight right hand doing the most damage of all.

He winged another heavy straight right hand over the top as soon as the second stanza started. Williams was walking onto big shots and you could tell there was no way he could take such punishment for too much longer. Unbeaten Adeleye was patient however and kept landing his strong right hand. A tired Williams somehow made it to the bell but was given a nice uppercut to take to the corner with him.

In the third round, the Ladbroke Grove man scored a right hook to Williams' temple which stunned the 18-and-a-half-stone fighter momentarily. Soon after, he ramped up the pressure and referee Michael Alexander jumped in at the right time to halt the contest. Williams proved his toughness by not going down despite taking very many heavy shots.

The 23-year-old showcased his ramrod jab and excellent right hand during the contest and will have earned a lot of new fans with that one-sided, brutal performance.

In a fantastic fight, Sam Maxwell moved to 14-0 with a unanimous decision win over former European champion Joe Hughes with scores of 98-92 and 97-94 twice.

It was the fight that a lot of fans were looking forward to the most and it did not disappoint. The talented pair stood toe to toe in the very first seconds of the contest and each landed some great punches. Maxwell scored a lovely right hook in the first, but Hughes scored a brutal left hook to the ribs, which the Liverpool fighter took very well.

as the fight wore on Maxwell was the busier boxer and was forcing the pace of the fight. He put nice combinations together and controlled the distance a bit better and bit more sensibly than from the start.

By round six, Sam Maxwell was beginning to force Joe Hughes backwards as he began to dominate. It was still an even match, with both boxers landing their shots. Maxwell was landing more straight shots as he kept the range just right for him.

It's the second successful defence of the Liverpudlian's WBO European super-lightweight title, which should give him another boost in the WBO World rankings. The 31-year-old is currently positioned at no.14, just below the likes of Regis Prograis, Maurice Hooker, Viktor Postol and fellow countryman Lewis Ritson, who occupies the top spot.

'Braveheart' Hutchinson won in the very first round to move to 12-0 with eight KOs.

Coming in at nine day's notice, Thomas landed a nice right hand just one minute into the opener, but Willy then landed a far better, far heavier single right hand shot halfway 30 seconds later. It was a lovely move where 'Hurricane' Hutchinson pulled back slightly to avoid 'Big Ben's' punch then launched his right hand forward with pinpoint accuracy to land perfectly, he then followed up the success and Thomas went down to catch a breather, still not recovered from the hard, accurate right hand. The Scotsman continued his assault and switched angles to get his shots in, the uppercuts having the most success, but referee Michael Alexander had seen enough and rightly stopped the contest.

Sporting a peculiar hairstyle, Sunny kept to boxing on the outside, with his traditional flashy style of fighting. He switched stance constantly and landed copiously with the right jab. Former English and Commonwealth bantamweight champion Essomba couldn't ever get close enough or cut off the ring space to trouble the world-ranked Edwards.

In round eight, viewers could hear the warring pair trading words rather than punches for a moment. 2012 Olympian Essomba goaded unbeaten British champion Edwards by saying, "Come on then", to which his opponent, way up on the scorecards, replied, "Na, I'm good man".

It almost worked, however, as moments later Essomba managed to catch Edwards flush with a fantastic right hand that spun the defending champion's haed around. He shook it off well though and continued to bounce around on his toes.

Despite a small scare where Sunny appeared to turn his ankle momentarily on the canvas, which incentivised the challenger to apply pressure, but he wasn't hurt or injured in any way, thankfully.

Currently ranked in the top 15 with the WBC, IBF and the WBO, 24-year-old ‘Showtime’ Sunny prevailed on all three ringside judges' scorecards with his impressive and somewhat comfortable performance almost to retain his IBF International super-flyweight belt. He is now looking to follow his brother Charlie and become a world champion, which looks very possible from his performances so far.

A real test for Sam Noakes but gets the job done in round 5. Ellison put up a worthy fight but did not have enough to deal with the weight of Noakes' blows.

The 23-year-old from Maidstone commented post-fight, "Yeah, I'm very happy with that, he's a tough kid, he was game. I got there in the end. After the second round, I felt good to go. I'm very happy to get the rounds in, it was a step up in opponent. I knew he was tough, and it came together nicely."

Snijders was down three times in the first round and somehow survived to hear the bell. But just 20 seconds into the second stanza, 'Dynamite' unleashed another attack which saw a right hook to the body as the offending punch that downed the Dutchman for the fourth and final time.

The cruiserweight and heavyweight Dutch national champion took a one-two to the face early into the fight and immediately got on his toes, seemingly hurt by the shots. For the first half of the round, the 26-year-old from Heerlen moved from side to side to avoid Dubois' attacks, but an accurate left hook to the ribs brought the IBO Inter-Continental cruiserweight contender down for the first time in the fight. Another knockdown followed, which seemed to be more of a pull down, but he was counted by refereeMarcus McDonnell anyway. The third count was on the bell and he was allowed to return to his corner for a very brief respite.

When the second round sounded, 'DDD' stormed in and finished things off very quickly. It was a one-sided fight that taught the 22-year-old nothing, but at least gave him a solid camp and a bit of ring time before his next and biggest assignment against rival Joe Joyce, due to take place before the end of the year.

Daniel Dubois told BT Sport afterwards: "I'm just getting warmed up. Just excited to be out there again. Hopefully next time I will have a proper fighter out there with me, Joe Joyce and whoever is next.

"I needed a fight, any fight really. Just get in and out and enjoy it.

"I'm calling him out - I'll do the same thing to him, even better. I can't wait to get it on with Joe - just a big name next, anyone will do.

"I need a step up, I've won the British and now I need to be on the trajectory to the World Title." 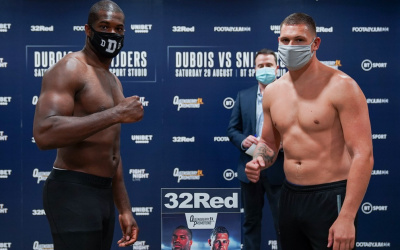 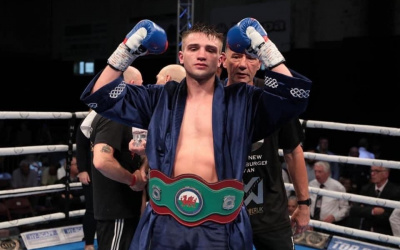 Injured Kieran Gething out for 2020