Find out all about the welterweight prospect as he transitions from amateur champion to fledgling professional.

Here's what the Londoner had to say:

Jonathan Kumuteo reflects on pro debut, comparing it to a video game

What made you want to start boxing?

“As a youngster I was always highly competitive, if there could be a winner no matter what it was, I simply wanted to win. After moving neighborhood’s, a friend of mine who boxed for Finchley Boxing Club turned out to be one of my new neighbours. After he challenged me several times to spar him at the local boxing club Finchley ABC. I decided to go for a boxing session and instantly fell in love with the sport.”

Who was your boxing hero growing up and why?

“Love him or hate him, Floyd Mayweather is the greatest pound-for-pound boxer of his generation. I was lucky enough to meet Mayweather and hear him talk about his life, in and out the ring, on his UK tour. When we met face to face, he gave me some words of wisdom which have humbled me and further inspired me to chase the dream.”

How old were you when you had your first fight and how did you do?

“I had my first fight aged 16, which I won via a unanimous points decision on 13th October 2012 against a boxer who had four fights.“

How well did you do in the amateurs?

“I boxed for Finchley Boxing Club as an amateur and competed all over the UK racking up victories, fighter of the night awards, and represented London on several occasions. Some of my achievements include; Senior London ABA Novice champion and Senior National ABA England medalist at Light Middleweight (71kg).”

What made you decide to turn pro?

“I was called up to represent my native country - Congo in the African Olympic qualification tournament, however due to the fact that I had to have a major operation which I have since recovered from I didn’t believe I would be ready in time for the Olympic qualifiers and therefore would have to wait another four years for a chance to compete in the Olympics, so I decided to shift my focus on the professional transition.”

What team do you have around you?

“I have a great small training team. I am also blessed and grateful to have such a huge company and platform in Frank Warren and BT Sport behind me supporting and guiding me through my career.”

Are you full-time as a pro?

“I am a full-time professional athlete who trains up to three times a day, five days a week.”

What sort of fighting style do you have?

“My fighting style is an aggressive counter puncher.”

What ambitions do you have for your pro career?

“To become a world champion.”

When is your first fight and who will be there in support?

“I was scheduled to make my professional debut on a Frank Warren / Queensberry Promotion show in London live on BT Sport in April however, due to the pandemic, professional sport has been postponed.

As soon as professional boxing is given the green light to commence by the government my team will be working tirelessly to make sure I debut very soon after! If social distancing measures have been relaxed the arena packed with many of my supporters which include numerous high-profile individuals.”

A word from our sponsors HÖRFA Menswear:

The Print Project – Get creative!

Since our launch in 2017, HÖRFA have always had a strong connection to art, displayed through our popular Printed Streetwear Collection.

Now, for the first time ever, we’re giving you the chance to create the next iconic print, in support of the NHS.

Your design can be anything you want, there are no set themes or limitations. Be inspired by nature, art, people, hope, ambition… your canvas is blank because we want to see your creativity in its fullness.

Visit our website HERE. We recommend submitted artwork is in the ratio of 210x140mm/px at 300dpi in .png or .jpg format. You can go taller than 140mm/px if you wish the design to be square or portrait. If you don’t have design packages or tools available, we recommend canva.com as a useful website to use.

Email your design to [email protected] by June 30, 2020, with a few words about the inspiration and meaning behind it.

Three finalists will be chosen and unveiled on the official HÖRFA website and social media channels on July 1, 2020.

The winner, chosen by the HÖRFA design team, will receive a £100 gift card as well as the final version of their t-shirt design sent in the post.

The winning design will be sold on horfawear.com with 100% of the profits donated to the NHS. 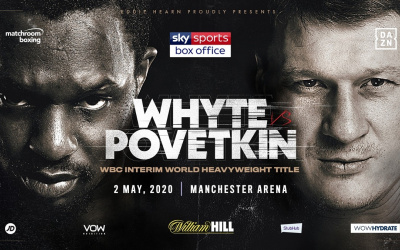 Dillian Whyte vs Alexander Povetkin will fight behind closed doors