Karim Guerfi insists that nothing will stop him from keeping hold of his belt as he prepares to defend his European bantamweight title against Lee McGregor on next week's huge #RotundaRumble event.

World title contender Guerfi (29-4, 9 KOs) goes up against British and Commonwealth king McGregor (9-0, 7 KOs) as part of the huge #RotundaRumble event on Saturday 6 February – live in the US on ESPN+ in association with Top Rank, and worldwide on IFL TV.

It kicks off a run of three incredible cards that are taking place in Dubai over the next three months, held by D4G Promotions in association with Round 10 Boxing and MTK Global, and sponsored by Everlast and Sports Direct.

The bad blood between Frenchman Guerfi and Scotsman McGregor appears to have been bubbling up in recent weeks, and the two-time European titlist is adamant that he will be the one walking out as champion.

33-year-old Guerfi said: "I'm so happy that the fight is nearly here. I was ready for January 22nd, so it's good news that the fight was re-arranged so quickly for February 6th. Dubai is an awesome place and I think it will be better fighting there.

"I'm 100% determined to win this fight. I have trained hard to beat Lee McGregor. I have stayed focused on my objective and I will be keeping hold of my European title.

"I will represent my country with great pride. They believe in me and I believe in my skills. I am going to put on a good show for the fans that will be watching on TV."

His British challenger is unbeaten in nine bouts with seven stoppages, which totals up to a respectable 78% KO ratio. Known as 'Lightning' Lee McGregor, the 24-year-old Edinburgh man won the Commonwealth bantamweight title in his fifth fight, then added the Lonsdale belt eighth bout against unbeaten countryman Kash Farooq via split decision.

His 10th professional opponent has been bettered four times during his career, most recently by Filipino IBO world bantamweight champion Michael Dasmarinas in April 2018; prior to that, he was defeated by Zhanat Zhakiyanov for the European title he currently holds in his second term; Omar Lamiri for the French national bantamweight title (he held the flyweight version in 2009); and his first ever defeat was to Juan Carlos Reveco for the WBA interim world flyweight title in 2012 when he was 18-0. 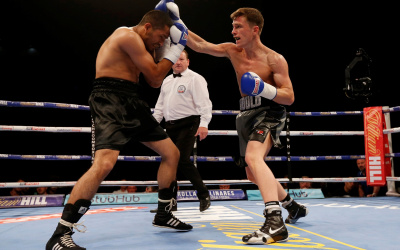