Frank Warren: Joe Joyce has guaranteed himself a bumper 2021

The making of Daniel Dubois vs Joe Joyce was met with pretty much a 100 per cent approval rating, from within the game and beyond. These are the sort of matches we want to deliver for the fans and we have done what we’ve said we would do.

It is funny that only after the event that those who said all along that they were struggling to pick a winner all of a sudden pipe up and say it was a fight or two too soon for Daniel and he was not ready for it.

You cannot have it both ways, you either want the best fighting the best, or you don’t.

Daniel was not out of his depth in any way, shape or form. Joe fought an intelligent fight, did what we all know he can do and, ultimately, came out on top. Joe was smart in his work and, especially when Daniel’s eye provided a natural target, he was quick to pepper it with lots of snappy jabs.

Despite the obvious handicap, Daniel was in there firing and while I considered the fight very close, two of the judges had him ahead. If the eye had allowed and he kept at it, we would have been in for a cliffhanger on the cards.

However, even though I have backed Daniel wholeheartedly since he turned professional with me in 2017, this does not mean we work any less harder for Joe or are not happy for him.

We put our fighters in together when the situation demands and we accept whatever the outcome. We push the winners on and go again with whoever loses. 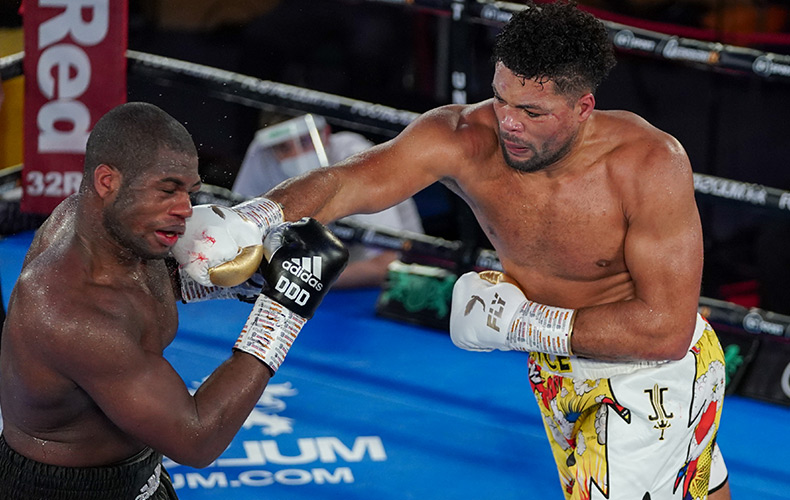 I am 100 per cent behind Joe and will be pushing him towards a world title. We signed him to a promotional agreement to do just that and it is what we will do. We invested hundreds of thousands in buying up his contract from his previous promoter and promised him big fights, which we have and will deliver on.

We will be in contact with the WBO to ratify his position in the rankings, but I would not imagine the heavyweight picture will become clear with the governing body until after the Anthony Joshua-Kubrat Pulev fight on December 12 and the ramifications for the mandatory challenger Oleksandr Usyk.

One thing is for sure, Joe is in for a big 2021 and everything is in play.

As for Daniel, he will need to take a bit of time out to lick his wounds and wait for his eye to heal before jumping back in the gym.

He is 23-years-old and a huge future remains in front of him.

While a few people pointed to a lack of experience when it came to how the fight ended, I would counter that perhaps he showed wisdom beyond his years in taking himself out of the firing line when his long-term health was at stake.

I don’t want a stricken fighter coming off one of my shows and struggling to resume normality. I don’t want one of my fighters with a plate holding together his eye socket. As it turns out, he has suffered multiple fractures to his eye socket, retinal bleeding and some mild nerve damage around the eye.

A fighter is in the best position to make a call and I would much prefer they do it sooner than when it is too late. Who is to say what further damage could have been caused by him sticking in there for another two minutes or so before the fight would have been stopped anyway.

I wouldn’t imagine many of us have any idea of the pain and discomfort caused by a fractured eye socket with nerve damage. Carrying on could have seen to it that he never fights again.

Boxing, essentially, is about winning or losing, it is not about proving how brave you are when you are not in a position to fully defend yourself.

Daniel’s career is in its infancy and putting his eyesight at risk is not a risk worth taking.

He will have to come again now and show us all what he is about. Daniel has got a good 10 years in the game in front of him and I am certain he will still become the major attraction and star of the sport I’ve always felt he will be.

He is a dedicated individual who lives for his boxing and he will come back stronger for the experience.

What shouldn’t get lost in all the debate over the ending is the indisputable fact that it was a great fight and the kind we want to see more of. We put it together in the midst of a difficult financial climate for everyone to tune without an additional price tag.

Fights like this are the ones that really matter. Fighters who are prepared to put their reputations on the line and prove themselves, prove they are ready to take the next big step.

Joe Joyce has guaranteed himself a bumper 2021.

BBN Fighter of the Year 2020 Awards

From the artistry of Ali to fun with Fury: My 65th year in journalism