Ball said: “I’m a fighter and any fight against a top British Welterweight I wouldn’t say no to it.

“Realistically, I would like to have two fights just to stay active and fight anyone. I’m not fussed.

“If the opportunity came up I would love to challenge the British champion, Chris Jenkins. That is my biggest target.

“I know Chris well from sparring and we keep in touch with each other. He is a good lad, but in boxing you have to fight and try and beat friends.

“I wouldn’t turn that fight down and I don’t think Chris would be happy if I did refuse that fight.”

The turnaround in Ball’s career is remarkable having boxed at Light-Heavyweight on the white collar circuit and then shedding two stone to box as a professional.

Kingswinford’s Ball, 24, slimmed down and made his debut in July 2017 leaving even his family shocked at what he achieved.

“To have done what I have in three-and-a-half years and to be promoted by Frank Warren, one of the biggest promoters in the world means a lot,” added Ball.

“I boxed as an amateur and went onto the white collar circuit just to keep fit and stay involved in boxing for a bit of fun.

“I don’t think anybody would have expected me to get this far as a professional, even my family because I liked my food.

“People underestimated me and didn’t think I was dedicated enough to get down to Welterweight. I was fighting at 12st 7lb on the white collar circuit.

“I had a tough fight in my final white collar contest and thought; ‘I’m better than this,’ so I decided to push my body and see where I got and it has clicked.

“I have let my weight go before between fights, but now I have such a big platform I’m straight back in the gym and keeping my weight down.”

Despite ten hard rounds against Gilley, Ball has returned to light training ready for the call from Warren about his next test.

He says: “I’m still over the moon with the win against Sam and to get the opportunity on BT Sport on a Queensberry show is something else.

“It was good to get ten hard rounds in and not to have everything my own way. I am back in the gym and can improve as a fighter.

“It was my TV debut and I will never forget walking onto the platform and seeing all the cameras. I didn’t freeze on the big stage.

“Errol Johnson (manager) is hoping to speak with Frank this week and get some idea when we might be back, but how nice will it be to box in front of fans again?” 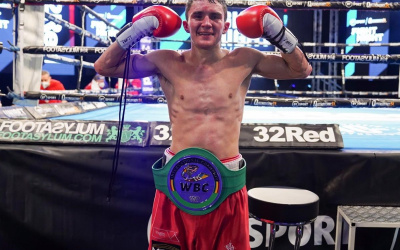