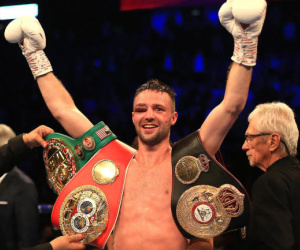 Josh Taylor (16-0, 12 KOs) defeated Regis Prograis (24-1, 20 KOs) on points in the World Boxing Super Series final in London in a busy, all-action bout to become the unified IBF and WBA super-lightweight champion, scooping up the coveted Ali Trophy and The Ring Magazine belt in the process.

Prograis was composed in the early battles but Taylor grew into the contest confidently and landed telling blows in the eighth, ninth and 10th rounds, before two fiercely contested final stanzas.

Taylor is now undefeated in 16 bouts as he certified his place as the no.1 super-lightweight in the world.

Trained by Shane McGuigan, 'The Tartan Tornado' inflicted his American opponent's first loss in 25 fights, while also claiming the WBA world title and WBC Diamond belt from his victim.

"He was here with us tonight and I want to dedicate this to him," he told Sky Sports post-fight.

"What a fight. All respect to Regis Prograis, a great fight, great champion, but the best man won.

"The free-flowing boxing, the inside work - I don't think he quite expected I could switch it up and go to range quite as quickly."

The fight was a mouth-watering prospect for pure boxing fans - two undefeated world champions, a bit of needle in the build-up and no fewer than five belts up for grabs in a packed stadium as the two southpaws prepared to battle.

Taylor, in his fourth year as a pro, spoke of his speed, reactions and timing being his greatest assets and all those attributes were tested in the energetic thriller.

He held the advantage in height and reach and was the man on the front foot as the Houston-based WBA champion relied on his head movement to evade Taylor's barrage before countering with both fists.

There was danger everywhere - and from both fighters. Crunching body shots, uppercuts, head-popping jabs, fists flying at close range and big overhead lefts.

By the mid-point of the scheduled 12 rounds, there was little between the fighters but the momentum seemed to be moving in favour of the Prestonpans puncher, two years younger than Prograis.

Taylor's right eye was swollen by round eight as the two world-class talents traded blows before the 2014 Glasgow Commonwealth Games champion stepped up his work-rate in the ninth with shots to the body and head of his resourceful foe.

In the hardest fight of their respective careers, the result was in the balance. Another strong round for Taylor in the 10th would have demoralised a lesser opponent but not Prograis - he traded body blows, landed a cracking uppercut on the taller Scot and soaked up heavy shots.

Prograis was back to his cocky, stylish best with three minutes remaining, Taylor replying with his own form of artistry to rouse the crowd once more as the final bell sounded.

The scores were close, but justified. Taylor had the edge of his unbeaten opponent for most of the fight.

"The one judge who gave the win by five rounds, I'm not sure what that was on about, but the other two scores were fair. Taylor found a new energy and I think Prograis let him into the fight."

"What an outcome. What an hour it was to be there ringside. Prograis half made out he won the fight. The last two rounds it was a difficult 10-9 to put down."

Dereck Chisora stopped fellow Briton David Price in the fourth round of a frenetic heavyweight clash at The O2 in London - then targeted Ukraine's Oleksandr Usyk.

Former world title contender Chisora, 35, unsettled Price at the end of the third round with two right hooks and unloaded again in the next round to send his opponent to the canvas.

Although a dazed and wobbled Price, 36, got up during the count, his corner threw in the towel to end the fight.

Usyk, 32, was the undisputed cruiserweight champion before he moved up to heavyweight this year. He won his first fight in the blue-ribbon division earlier this month when he defeated Chazz Witherspoon, a late replacement for Tyrone Spong who had returned an adverse doping test.

David Haye, the former two-weight world champion who now manages Chisora, told Sky Sports: "I like the Oleksandr Usyk fight. That would be a fantastic fight.

"If he fights Oleksandr Usyk, he's right up there for a heavyweight title shot. A title shot is what he wants."

Elsewhere on the undercard, Lawrence Okolie took the European cruiserweight title from Belgian Yves Ngabu, who had a 20-0 record.

The fight was stopped in the seventh round after the 26-year-old landed a left hook and then a big right hand which left Ngabu unsteady on his feet.

"I could hear him get more and more tired," Okolie told Sky Sports. "If I hit any cruiserweight on the chin then they're going to go."

"I believe he will breeze his way to a world title," added promoter Eddie Hearn. "Watch him become a world champion in 2020."