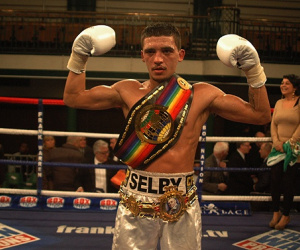 Referee Marcus McDonnell stopped the fight late in the ninth round as the Welshman outclassed his previously unbeaten Australian opponent.

Selby, 27, should now meet IBF world champion Evgeny Gradovich - and hopes to face the Russian in March. British and Commonwealth champion Selby vacated his European title to clear the way for a shot at a world title.

"I'll beat Gradovich comfortably," said Selby, who has lost once in 21 fights. "Brunker is a tougher fighter in that he's more of a pressing fighter. Against Gradovich, I'll have even more time to get my shots off."

He went on the offensive from the first bell and used his speed well, shaking Brunker with a straight right and an uppercut in the fifth round. The Australian regained a little ground over the next couple of rounds despite some damage above his right eye.

But a huge body shot from Selby in the ninth, followed by a decisive combination of punches from the Barry fighter, ended the contest.

Selby admitted it would be "nice" to fight for the world title at home, but said his victories over Stephen Smith in Liverpool and Martin Lindsay in Belfast proved he would be unfazed about boxing elsewhere.

"When I went up to Liverpool, I was something like the 7-1 underdog... so I went out and made a statement," he said. "The same when I went to Ireland - when I walked to the ring they were calling me all sorts, so I thought, 'I'll show you all now'. It brings the best out of me."

Selby is first planning a break before preparing to fight Gradovich. "I'm always in the gym, you can count the number of days I have off in a year on your hands, literally," said Selby. "I think I'll give myself a little break, let my body recover nicely. I won't balloon up in weight because I look after myself, eat nice food and I'll just relax, go on holiday. "I'll have a chance to spend time with my new daughter, she's only three months old and I've spent four weeks away in training camps in Spain and America and the rest of the time I'm constantly training. So I'll have some time to bond with her, because I've missed that really and I'll spend a bit of family time when I get back home."

Steve Wood: “Jack Massey is one of the best prospects in the UK”