BBN have provided viewers with all the details needed to tune in to the triple title header, topped by Liam Williams and Andrew Robinson on the 283rd day of the year.

Liam Williams: "I would happily face Chris Eubank Jr because I know I’d beat him"

It takes place behind closed doors at the BT Sport Studios in Stratford, London.

Welshman Williams’ British middleweight title is on the line.

The ring walks for the main event are expected from 10pm UK time but that will depend on the undercard results.

Coverage will start at around 7pm, live and exclusive on BT Sport 1.

You can find out what happens via sport.bt.com or by downloading the mobile app, or follow @frankwarren_tv on Twitter for event updates.

The show boasts a trio of title fights.

Liam Williams: "I am obviously very, very confident and I know I will make a good job of him because I am training hard and I will turn up like I do for every other fight having left no stone unturned. I don't think he is on my level but I am definitely not taking him lightly and I will approach the fight the way I do the others and that is with bad intentions. He is my mandatory and I think it is a dangerous fight because I think he could possibly get hurt. The referee and his team need to be careful and need to be looking after his health and interests because I genuinely think I could damage him."

Frank Warren: "Liam Williams has blazed a trail through the middleweight division in a blistering fashion that has captured the imagination of the public. He is a big player now who is on the cusp of a world title shot that will be right in play once travel and crowd restrictions have been eased. He is still the British champion and Andrew Robinson is his mandatory challenger, so Liam has got genuine business to attend to on the night and I know it is a job he will be taking seriously.

"Anthony Cacace and Lyon Woodstock should be a real barnstormer and the winner of this one will be an excellent position to secure more big fights in what is a thriving super featherweight division. I am also looking forward to seeing JJ Metcalf back in action against Jack Flatley. JJ has been absent through injury and if he comes through this and retains his Commonwealth title there are massive fights in front of him on the domestic super welterweight front.

"I am also delighted to showcase three of the most captivating talents in the game in Dennis McCann, Mark Chamberlain and Ryan Garner on the same card. I am convinced in a few years’ time that these three will be competing for headline status on the big shows with major titles at stake."

BBN Editor, Tim Rickson: “Liam Williams is an incredible boxer, who lives the life and wants the glory above the fame. Since his two fights with former world champion Liam Smith, he has been a different animal and has seen off everyone. He’s currently on six-fight KO streak and pushing for world title shots. He’s now WBC #3, and WBO #2, so his time will come very soon. We all know that he is well above British level, and his first fight with Smith proved he can more than mix it with a world champion.

Robinson has only been stopped once in four defeats, and that was to Mark Heffron in the sixth round, who Williams stopped in 10 rounds to win the Lonsdale belt. He's the mandatory challenger so has earned his right to to be there.

I expect Williams to patient, sharp and in control from the very first bell, but still ruthless when the time comes. I'm predicting a mid-rounds stoppage win to Williams. Then, I hope he gets a world title shot because he is more than ready and so confident of becoming world champion.”

It was back in September 2019 that the news was first released by the British Board about Liam Williams and mandatory challenger Andrew Robinson agreeing to meet for the British middleweight title.

Williams first had to deal with WBO #1 Alantez Fox in December last year, which he did in emphatic fashion in five rounds to win the vacant WBO Inter-Continental middleweight title.

He comes into the fight off the back of six straight stoppage wins against very good competition. Robinson has won his last three contests since his defeat to Heffron in 2018. One of those victories include a suprise victory away from home in Poland in April 2019, when Robinson defeated Damian 'The Beast' Jonak (41-1-1, 21KOs), who was unbeaten in 42 fights at the time. Jonak had won three WBC minor titles as well as the WBA International belt, but he was tamed by the Brit in his own backyard.

Robinson is a credible contender but Williams has been bulldozing his way through higher level opponents in devastating fashion for the past two years, so fight fans can expect the very same on October 10. 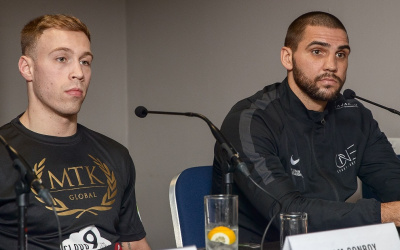 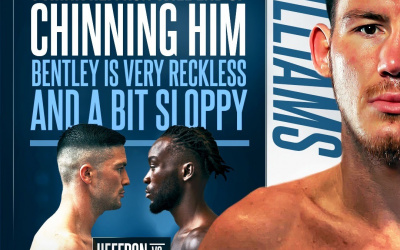