On Saturday, October 10, Welshman Liam Williams defends his British middleweight title for the second time to challenger Andrew Robinson behind closed doors at the BT Sport Studios in London.

‘The Dartford Destroyer’ went down in history as one of England’s greatest boxers of all-time, and Williams will want to be remembered in the same way by his beloved Wales.

28-year-old Williams’ only defeats came in two memorable fights with former world champion Liam Smith (29-2-1, 16KOs), which were his only two fights in 2017.

In the first fight, with the WBO interim World super-welterweight title on the line, Williams got the better of the Liverpudlian in Manchester, until a head clash, deemed purposeful by many spectators, caused a double laceration to the Welshman’s right eyelid and he was retired by his corner in round nine despite leading on all three scorecards at the time.

In the rematch, Smith bucked up his ideas and deserved the mixed decision victory after 12 exciting rounds of action.

Williams bounced back with a brace of wins before challenging for the British title at a second weight division up at middleweight. Williams won the super-welterweight belt in December 2015 which he defended once, successfully, in an epic battle with then-unbeaten Gary Corcoron (18-3, 8KOs), which ended in the 11th round.

The Lonsdale belt was vacant and it was unbeaten powerhouse Mark Heffron (25-1-1, 19KOs) that stood in his way of becoming a two-weight British champion, and spectators were soon left stunned with the way that Williams despatched of Oldham’s 'Kid Dynamite' in the 10th round, then were further amazed with the way he handled his first defence by blasting away the durable ‘Smokin’ Joe Mullender (11-3, 5KOs) in just two rounds.

Then came his crowning glory in December last year as he dominated the WBO #1 Alantez Fox (26-2-1, 12KOs) to claim the vacant WBO Inter-Continental middleweight title.

His 26th ring opponent, Robinson, put up a spirited performance in his 14th fight against Frank Buglioni (22-4-1, 16KOs) back in 2014, which was a huge step up in levels for the Brummie at the time. He lost on points and the chance to claim the vacant WBO European super-middleweight title.

He bounced back shorty after to win the Midlands Area super-middleweight belt in 2015. The next year finished rather badly for ‘D’Animal’ as he fell to a razor-thin split decision defeat to Sam Sheedy (18-3-1, 4KOs), then he lost out on the English middleweight title to Lee Markham (17-41, 7KOs). The bad fortune continued into 2017, as he started the year with a draw against journeyman Adam Jones (8-35-6, 2KOs).

However, he then reeled off three wins on the spin to land a fight with Mark Heffron, who was unbeaten in 19 contests at the time. It would result in a fourth career loss for Robinson, but notably his first and only stoppage defeat. His eye was badly marked by round four but a powerful left hook to the head, after some dubious low blows, signalled the end in round six. Robinson showed he had an iron chin in that fight, despite the early ending, and was stopped on his feet.

2019 was a better year for the Redditch resident as he notched up three wins in a row. One of those was a surprise victory away from home in Poland to ‘The Beast’ Damian Jonak (41-1-2, 21KOs), ending his 42-fight winning streak and 13-year unbeaten record. Robinson triumphed over the former WBA International super-welterweight champion and two-weight WBC Youth titlist on a split decision.

Williams has a 68% KO ratio, but his since his brace of reverses to Liam Smith, it now stands at 100% over his last six scraps. Only Heffron made it to the second half of the contest against Williams, all others succumbing before the sixth round could start.

Robinson has proved his toughness enough times, and he has been in with top domestic fighters. Against Williams he will have met his most formidable foe yet. If Heffron landed enough times to force the stoppage in round six, then you could envisage Williams doing even better than that.

The Welshman has been bowling over better challengers in recent times, so Robinson is not likely to make it to the midway mark, like five of his last six rivals.

Williams is so desperate for his world title shot, his patience has run out now, so he will be looking to put on a clinical performance to make the likes of Demetrius Andrade (29-0, 18KOs), Patrick Teixeira (31-1, 22KOs), and Jermall Charlo (31-0, 22KOs) sit up and take notice.

I predict a devastating performance from Williams to blast Robinson away in any of the first five rounds.

In his last fight, he won the British super-featherweight title with a split decision victory over the reigning champion Sam Bowen (15-1, 11KOs).

He makes his maiden title defence to the talented 24-year-old Lyon Woodstock (12-2, 5KOs), who has only won one from his last three fights.

Defeats to once-beaten Zelfa Barrett (24-1, 15KOs) for the Commonwealth super-featherweight title, and unbeaten Archie Sharp (19-0, 9KOs) for the WBO European strap were both entertaining, enthralling affairs. Woodstock may have lost both bouts by UD but he was in the contests the whole way and it was very even and enjoyable to watch.

To me, this contest has points written all over it, despite the many endorsements of ‘The Apache’ Cacace’s power from sparring partners who have felt it, such as Carl Frampton, who rates his compatriot as the hardest puncher he’s ever sparred with.

I think this will be a unanimous decision win to Cacace.

The Liverpool man, known as 'Kid Shamrock', is firmly in the frame for British title honours. He won his belt in June of last year by stopping former world title challenger Jason Welborn with a crippling left to the body in round eight.

The 32-year-old from Liverpool makes his maiden title defence to Bolton's 'Quiet Storm', who became English champion by defeating Craig Morris in May 2019 before dropping his title on points to Harry Scarff in the September. The 25-year-old returned to winning ways by defeating Alastair Warren in December.

JJ's last seven contests have ended early, so he will be supremely confident going into this one. Flatley is tough, so a stoppage won't be easy. I predict JJ winning this contest on points.

The title action is supplemented by three of the most exciting prospects in British boxing, as well as heavyweights Nathan Gorman (16-1, 11KOs) and Richard Lartey (14-2, 11KOs). Both of these big men have been beaten once by the same rival - Daniel Dubois (15-0, 14KOs). They also share the same number of stoppages in a similar amount of fights.

Lartey fought fire with fire against 'DDD' in April 2019, but this will be a different type of fight with Gorman, who is a bit more of a slick boxer that will be patient and less willing for a toe-to-toe war.

Gorman should return to his best with a 10-round unanimous points win over the Ghanaian.

Thrilling bantamweight Dennis McCann (7-0, 5KOs) will have his eighth professional fight after making a big statement last time out by stopping Brett Fidoe in the second round - only the second to halt Fidoe in 80 fights. He was due to take on Portuguese fighter Pedro Matos (7-3, 1KOs), but he withdrew from the contest this week. Despite the disappointing news, McCann should still be fighting on the card.

The Southampton snapper Ryan 'The Piranha' Garner (9-0) returns to business at super-featherweight with a match against Birmingham's experienced Sean Davies (14-14). He will be joined on the card by his teammate on the South Coast, Mark Chamberlain (6-0), who takes a step-up fight against Shaun Cooper (10-1) from Willenhall.

All the latest news on Fury vs Wilder 3 according to Tyson's valued cornerman and confidant, Jorge Capetillo 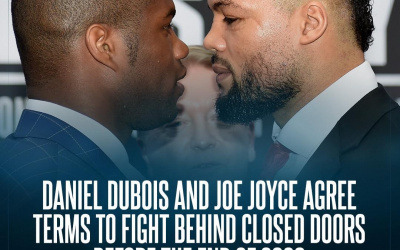