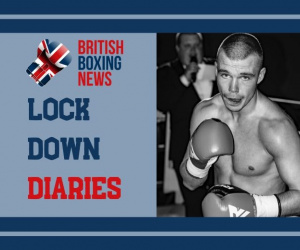 First turning pro in 2015, aged just 18, Cain KO’d his first two victims within two rounds before taking a break from boxing to earn money away from the ring to provide for his family. He came back to the sport three-and-a-half years later and continued to knock ‘em down as if he had never been away, now menacingly boasting five KO victories from five fights.

His reward for his ruthlessness was a signed contract with Frank Warren, along with his Red Triangle teammates Nick Ball and Bradley Strand. The good news that he was now a Queensberry Promotions fighter came in mid-February this year, then he took to the ring just a fortnight later to prove the Hall of Fame promoter he had made a good choice by demolishing his Nicaraguan opponent in less than three minutes.

That fight came just before the pandemic become serious enough to cause a lockdown just two weeks later. In an uncertain time where nothing is promised, Cain is concentrating only on the things he can control, leaving everything else to run its own course:

How is lockdown going for you, have you been training still?

“Yeah, bit of running, a few circuits, shadow boxing, there’s only so much you can do ya’ know. I’ve just moved into a new house with my girlfriend, so I’ve been busy with that. There’s only so much I can do with this lockdown, without getting too fed up with it.”

How difficult is it to train without something to aim for?

Do you count yourself lucky to have been one of very few to have fought already this year?

“I suppose so; this lockdown puts everyone in same boat, it doesn’t matter who we are, how big the name is, we’re all the same right now.”

Five KOs from five wins – is getting harder to find willing opponents?

“I don’t know, to be honest, I don’t pay much attention to that side of things, Paul [Stevenson] deals with that. The matchmaker said at my last fight, ‘Stop knocking them out, you!’ So I think he had a problem getting opponents for the last fight, I got told!

Even as my career goes forward, it might be the case even more, because no one wants to put their stars in there at that risk, do they? It’d be a risk to be put anyone in there with me, no matter what level.”

Did you do anything differently when you returned to boxing after over three years away?

“Not really mate, I just got myself back in the gym again.

I fell out of love with boxing, I was looking round at the lads in our gym and I saw something happened with Kev Satchell when he lost his belts without losing a fight and just all the politics of boxing and I thought, ‘I can’t afford to do this’.

Do you think boxing events will return differently after lockdown ends?

“I don’t think there will be any going ahead until the government says so. At first, I was wondering about the Board, thinking that they’d want the shows going on, but I soon realised it’s coming from higher powers.

“Right now, I’m sitting here watching Mike Tyson vs Buster Douglas. Paul [Stevenson] told me to watch Lennox Lewis vs Vitali Klitschko, but I’ve just been flicking through on YouTube, so I just have a little watch of whatever catches my eye.”

What would your ideal plans be for the rest of this year?

“Just to fight as much as often, and to get us back in the gym properly – just give me three weeks notice and I’ll fight! At the moment, I’m getting looked at by Frank [Warren], but I’m on his bottom shelf at the moment, and that’s understandable, but that’s definitely gonna’ play a part, there’s definitely gonna’ be a backlog. I’m not thinking that I desperately wanna’ get on this show and get on that show… I’m just taking every day as it comes.”

You are part of a talented division in the featherweights with experienced British champion Ryan Walsh and Commonwealth champ Leigh Wood – how soon do you think you can start mixing it with those more established pros?

“To be honest, in my head – this might sound stupid – but I’m already at that level.

Me and Peter McGrail have been sparring since we were 10-years-old, and he’s qualified for the next Olympics. I know it; everyone who knows me knows it; but it’ll be a few years until everybody else knows. It’s not proven yet in the public’s eyes, but everyone who knows me, knows I’m there. In the boxing world, it just takes time to get there, get those opportunities, and got to be a bit lucky as well.

I made the decision at 14 or 15 that I didn’t want to go to Sheffield [where Team GB trains] and I turned pro to get those belts I dreamed of, and everyone told me had a pro style. When I look back, I think it was a stupid decision, but I didn’t realise back then.

I’ve just got to fast track myself by keep knocking them out. I did have people telling me to stay in the amateurs, but I didn’t understand how it all worked back then, you don’t understand about ticket sales and stuff like at 14, I was naïve and didn’t listen, I just wanted to be in the pros.

I don’t want to badmouth anyone, but when I listen to someone like Paul [Stevenson], then listen to them fellas [at Sheffield Institute of Sport] and it wasn’t the same. I think it’s because Paul’s so good, he’s not recognised but he’s one of the best coaches in the world.

When I fought for England, I lost to the same kid twice, David Burrell, then when I got him on my own show with my Red Triangle vest on, I obliterated him, he didn’t even land a punch and I think he stopped boxing after that. The whole point scoring changed soon after I turned pro, which would have suited me better as well!”

What will signing contracts with Frank Warren do for your career?

“To be honest mate, I’ve already done all this before, I sort of seen boxing for what it was and I didn’t like it, it’s been my dream for such a long age, when I realised about the politics and tickets sales and seeing fighters get dreams shattered through no fault of their own, I couldn’t even watch a boxing fight, I fell out of love with it completely, ended up working, but then realised that boxing is the love of my life and got myself back in the gym again.

You stay away from social media, where others use it regularly as a tool to promote their selves and elevate their platform – what are the benefits of not being on social media?

My cousin’s being going on at me, saying I need to do this, and before my last fight he made me a profile on Instagram and is looking after it, but I don’t want to get involved. I get messages from people from school and I go on there to look and get sucked in. It’s just a big fake world, you only see what people want you to see.

Some people can let social media get to their head, and I’ve heard it loads of times after fights, and it can add pressure and get into their heads, so I keep out of it.”