Before Jose Ramirez (26-0, 17KOs) and Josh Taylor (17-0, 13KOs) clash for the undisputed super-lightweight world title Saturday, May 22 at The Theater at Virgin Hotels Las Vegas, two featherweight firefights will get the action going.

Mexican contender Jose Enrique Vivas will battle the Robert Garcia-trained Louie Coria in a scheduled eight-rounder. And, in an eight-rounder with a touch of gold, two-time Cuban Olympic gold medalist Robeisy Ramirez will face Juan Tapia, the fighting pride of Brownsville, Texas.

Vivas-Coria and Ramirez-Tapia are among the undercard fights scheduled to stream live and exclusively on ESPN+ at 5:15 p.m. ET/2:15 p.m. PT.

Vivas (20-1, 11 KOs) went 2-0 last year inside the MGM Grand Las Vegas Bubble, outlasting Carlos Jackson in a Fight of the Year contender and knocking out John Vincent Moralde in the opening round. A former Mexican amateur standout, Vivas has won three straight bouts since a points loss to Ruben Villa. Coria (12-4, 7 KOs), from Moreno Valley, California, hopes to break a two-bout losing skid, although both defeats came in brawls that could’ve easily gone his way. Last June, he dropped a majority decision to Adam Lopez, and four months later, he knocked down 2016 Olympic gold medalist Robson Conceicao en route to a disputed unanimous decision verdict.

Ramirez (6-1, 4 KOs) turned his career around following a shocking decision defeat to Adan Gonzales in his professional debut. He avenged that loss last July via shutout decision and most recently knocked out Brandon Valdes (13-1 at the time) in the sixth round. Ramirez makes his 2021 debut against Tapia (10-3, 3 KOs), a seven-year pro who has gone the distance against 2016 Olympic bronze medalist Vladimir Nikitin and pound-for-pound standout Shakur Stevenson.

Middleweight prospect Javier "Milwaukee Made" Martinez (3-0, 1 KO), who was once the top-ranked American amateur at 165 pounds, will fight veteran Calvin Metcalf (10-5-1, 3 KOs) in a six-rounder. Martinez last fought Feb. 20 and knocked out Billy Wagner in the first round.

How to watch Ramirez-Taylor in the UK

Daniel Dubois is ready to release six months of frustration on Bogdan Dinu: “I will beat him up and knock him out!” 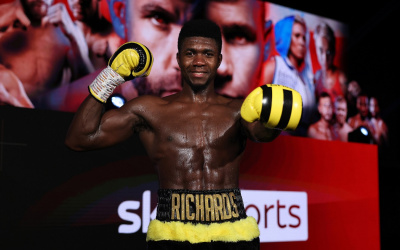