Former English champion Nav Mansouri is building a big reputation and a legion of followers in Spain but will return to the UK to target the British title at the first opportunity.

The Yorkshireman (17-1-2-KO5) hunts back-to-back wins in Marbella this weekend when he takes on Mamadou Goita on a card that also includes MTK Global team-mates Ryan Farrag and Enmanuel Guerra.

Mansouri said: “This is my second fight in as many months and I’m loving being so active. It keeps me training and staying in shape. I stay fight-ready and always have something to aim for.

Press conference quotes: Felix Cash aims to show he is a level above Jason Welborn

“After this one, I hope to get the next fight back in Britain but to be honest I’m liking it in Marbella and I’m building a real following out here. I’m doing good tickets.

“If I go back to the UK after this one then I want a 50-50 fight to please my home crowd. The British and Commonwealth titles are the ones I want. Those or an Intercontinental title that will push me to world-level.

"I’ve already been English champion and I don’t think I need to go back there but if I was told it was necessary as a warm-up for bigger things then I’d win that belt again.

“It’s great being on the same bill as my team-mates Ryan and Enmanuel for this one. We push each other in the gym and it’s really health competition. The place is buzzing and fans are in for a good show.” 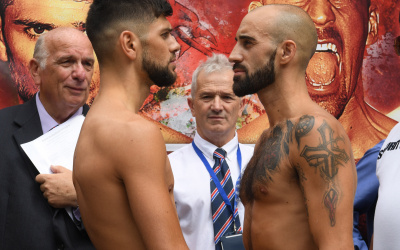