They will clash for the WBC World Interim Lightweight Championship, on a card presented by Golden Boy Promotions and Matchroom Boxing, which will be broadcast on US soil through DAZN.

This is the first major title fight for Garcia, 22-years-old, who has not fought since a first-round knockout of Francisco Fonseco on February 14.

Dillian Whyte gets his revenge against Alexander Povetkin

“I’ve been anxiously waiting to get back in the ring and I’ve been working harder than ever to get here,” Garcia said. “It’s been a rough year for everyone, but I’m excited to give the fans an escape for the night, or, based on my record, a few minutes tops! Luke’s record speaks for itself, but I’m willing to prove the skeptics wrong. This is my era and December 5 is just the beginning.”

Luke comes in from losing by decision in a great fight against Ukrainian Vasyl Lomachenko, in August of last year.

“There has been a lot of talk and clearly [Ryan] is a very respected fighter, but I’m going to show that this is too early for him and that I’m at a completely different level. I’ve fought in America before, so this will be nothing new for me and my team.

“Fans or no fans, the only thing I can guarantee is that I will return to the UK with a victory, ” Campbell commented. 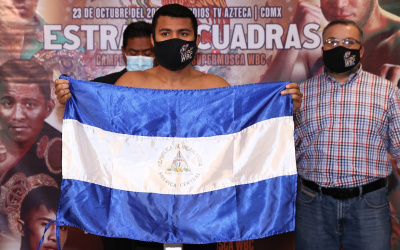