Ryan Garner: I believe I am going to win a title this year

Unbeaten Ryan Garner believes this is the year for titles

Ryan Garner has been inspired by the recent featherweight thriller between Josh Warrington and Carl Frampton and believes 2019 is his year.

The precocious 21-year-old from Southampton wants some boxing bling to accompany his obvious talent and is adamant that he wants to get into the belt business in 2019.

'The Piranha', as he is otherwise known, enters into his ninth professional contest at the Morningside Arena in Leicester on February 23 to kick off a year he strongly suspects will be a defining one for him.

"I believe I am going to win something. Anything really, the English, the WBO European or Intercontinental, I just want to win one."

Garner's own train of thought is that his apprenticeship has been served and he is ready to participate in some genuine punch-ups against equally willing opponents.

"One hundred per cent, this is the year where I know myself - having been a pro for three years - that this is where I need to step up and face people of a much better level than I have been facing so far.

"So I need to keep my head focused, train my b*lls off and get myself ready.

"I think it will make me look even better and I will enjoy it. These people I have been fighting are half trying just to survive. It makes it harder sometimes.

"I think when people start throwing back that is when I will start stopping people even more because they will leave themselves open."

Garner concedes that entering into open warfare in the ring is what he enjoys most and it is not something he is prepared to change, bar a little tightening of the defences. He is in the entertainment business and he knows it.

"Definitely, with my style it is always going to be an exciting fight and every fight I've had has been that way. It is just the way I am, I am front-foot, aggressive and I won't change.

Those are my main attributes, my workrate and punch variety, but I need to do little things to not get hit as much so we are tweaking things.

"But my style is what makes me entertaining and you don't want to take that away from me. It works for me and that is what people want to see on television. Look at the likes of Gatti who everybody wanted to watch.

"When I am fighting I want people to think 'I'm going to watch that Ryan Garner because he is always in good fights'.

"I want to be in fights like the Warrington-Frampton one," added the cherubic-looking pugilist, who confirmed that he definitely intends to campaign as a nine-stoner in his bid for honours.

"I am a featherweight, definitely. I was 9st 1lb for my last fight so I was only a bit over. With my nutritionist for my last fight it was the best I have felt going into it. I made the weight and felt totally fresh."

Tickets for the British super-featherweight title clash between Sam Bowen and Ronnie Clark on Feb 23 at the Morningside Arena, featuring Ryan Garner, are available from £40 are on sale NOW via Eventbrite 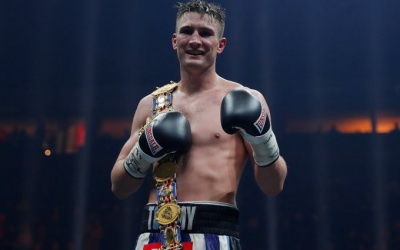