Saul Canelo Alvarez now has 15 world titles to his name

Canelo has now won the following titles during his 16-year, 59-fight professional career:

Zach Parker: "I have got the worst style for Canelo - he would be in for a rude awakening if we do fight"

Canelo is the second boxer in history to hold world titles in three weight divisions simultaneously. The first to acheive this was the legendary Henry Armstrong, regarded by some as the greatest fighter ever.

What is next for Canelo Alvarez?

It did not take long for Alvarez to call out his next opponent after defeating Saunders. Canelo now holds three of the four recognised world titles at super middleweight - and he wants the final piece of the puzzle before the end of the year.

IBF champion Caleb Plant is the only man standing between Alvarez and total dominance of the 168-pound division. Expected to be back in the ring in September, Canelo wants Plant to be the man in the opposite corner when he does make his return. 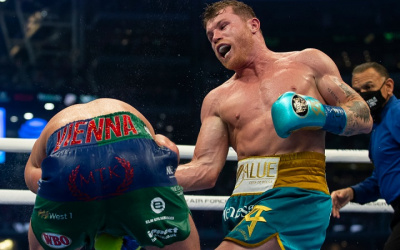