Hennessy Sports' five-fight card, featuring the British light-heavyweight title clash between Shakan Pitters and Chad Sugden, is being broadcast tonight from 10pm, live on Channel 5, and BBN are providing fans with all the up to date results as it happens.

Love Island star Idris Virgo moved up to 6-0-1 with a first-round stoppage win to kick off the card in explosive style.

In a Birmingham derby, Virgo didn’t even break into a sweat as he dispatched of Josh Hodgins inside one round with a sickening left hook to the body that had Hodgins yell out in pain.

Virgo, the former Love Island contest, said, “They call me the Body Breaker, as soon as I hit the body they go.  I’ll destroy any opponent put in front of me.  Step in my way and you’re gone.  I might have been in Love Island but I ain’t showing no love in the ring.  I’m serious and I mean business, I’m here to show people I can fight.”

Conah Walker should have been up against Kaisee Benjamin for the Midlands Area Welterweight title, but Benjamin withdrew earlier in the week from a stomach viral infection.

Sutton Coldfield’s Nathan Bendon stepped in at the last minute and it was a rematch of their encounter in May last year that Walker won on points over six-rounds.

Walker was on top from the start, moving into range using a stiff jab and strong right hand before landing a hard body shot, then moving or swaying out of the way.

Walker kept working well to head and body and Bendon had some success with his right hand at points.

It was Walkers better work rate and cleaner punches that got him the decision again, scored 60-54.

Burford’s Brennan called out for the fight during the lockdown and Hennessy accepted the challenge coming in fit and ready.

Hennessy was working with a new corner team of Junior Saba and John Pegg and he looked more composed and balanced as he pumped out a stiff left jab.

The Sevenoaks talent landed with some good clean body shots in the opening rounds and connected with a good right hand in the second.

In the fourth he showed some good combinations punching and landing with more clean body shots.

Hennessy Jr. was happy to get a win after nine months out of the ring.

He said, “He was tough customer and I felt in control in there.  It was good to get the ring rust off and I can’t wait to fight in two weeks’ time again.  I think I showed new things in there tonight that I’d been working on and there is still plenty of improvements to come.”

The Sevenoaks talent takes his record to 4-0-1 and will be out in action again on September 5th in Wakefield.

Brixton cruiserweight Isaac Chamberlain sizzled in his return to the ring after a two year lay off to blow away Antony Woolery inside three rounds to get his first win in 22 months.

IC got to work with his sharp jabs in the early round and showed composure as he moved around the ring.

In the second round, towards the end, Chamberlain landed a good right that made Woolery come out swinging.

Chamberlain upped the tempo in the third round as he started landing left hooks and unsettling Woolery.  He started working to the body more and got Woolery to the ropes and then landed a hard left hand to the body that folded the Wolverhampton former soldier.

“It’s been a tough two years, but I’m happy to be finally over that and get out tonight and showcase my skills.  The left hook is my money punch and mixed with my strength and conditioning it was a real potent weapon.  I just took my time, I knew he’d rush me.  My corner told me to relax and get into my flow and boom I took him out.”

Chamberlain will get little rest, he will now return to action in two weeks’ time in another eight-round contest.

A feeling out process in the first round but Sugden landed a great right hand midway through. Pitters responded with a hard right in return in the final minute. Sugden has success again in the final moments of the opener. Hard round to split.

Pitters looked in control in the second round, calm and collected, countering well. Clear round for Pitters.

Brummie boxer Pitters boxing fluidly by round three having found his rhythm, and landed a lovely uppercut in the dying seconds.

Sugden trying hard to work his way into range but keeps getting caught with right hands. Pitters scores another clean uppercut. Chad gets into range and puts his man on the ropes in round four but smothers his work and wastes his opportunity. Another round in the bag for Shak.

It was a better round for Sugden but none of his work ever really troubled his opponent.

In the last minute of round six, Shakan landed strong right hands to body then head.

Birmingham's Pitters has controlled the pace and distance all through the contest. By rounds seven and eight, Sugden was putting in extra effort to land his shots and try for a knockout.

By round nine, Sugden's split lip was looking frightful. Pitters was too slick in defence, which is actually Sugden's alias - '2Slick', which is quite ironic seeing as he isn't very slick at all. Pitters seeing out every round with relative ease at the moment.

Pitters lands a lovely right hand in the middle of round 10. Father of one, Pitters was rarely troubled at any point during the contest. However, Sugden landed a strong left hook in the 10th that shook Shak. It was a peach of a punch that landed bang on the chin.

Sugden was hurt by a right hand over the top in the 11th and penultimate round, Shakan poured on the pressure, but he clung on to hear the bell sound for the final round.

Pitters started the final round by keeping Sugden at the end of his jab. Even in the last round, Sugden had no urgency during the round until the final 30 seconds, where he tried land everything he could. Too little, too late.

The new British 175lbs title-holder said afterwards, “Chad was very game and I take my hat off to him.  I kept it long and punished him as he came in.  He was a very tough opponent but he didn’t trouble me.  I wanted to keep things basic and it worked.  I’m always learning and this was my first 12-rounder. 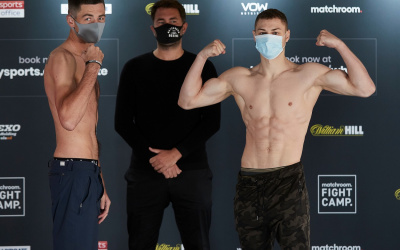 Zak Chelli warns Jack Cullen: "I dropped a cruiserweight in round two so imagine what I’ll do in this fight"