Sunny Edwards put on another boxing masterclass to snatch the IBF International and WBO Inter-Continental flyweight titles at York Hall.

‘Showtime’ cruised past Mexico’s Hugo Guarneros with a convincing points display to take his record to 13-0, 4 KOs on a night that saw MTK Global team-mate Lucien Reid controversially denied the British and Commonwealth super-bantamweight titles.

Edwards said: “No disrespect to my opponent but I didn’t get out of first gear. I wanted to finish strong and see if we could get him out of there but in the seventh, I caught him clean with a right hand and my hand ballooned up.

“The last few rounds had to be all on the jab. I did want to have a trade and finish strong but why take the risk? He seemed quite heavy-handed but I think the cleanest shot he scored was a jab in the second round.

“I feel like I impressed again. I stuck to the gameplan.

“I felt stronger in there. It’s arguably the best shape I’ve been in. No excuses but everyone who knows me know I’ve had a cold the last few weeks. As soon as I warmed up, it went and I enjoyed myself.”

After Edwards’ success it was Reid’s turn to try and snatch a pair of titles but his entertaining clash was ruled a majority draw with one judge scoring it 116-112 in his favour and the other two 114-114.

Reid said: “He knows I won that. He came up to me afterwards and said he felt lucky to still be champion. The rematch will be a lot different.

“Considering I’ve never done a 12-rounder before, I found it easy. I’m a naturally fit person. I’m gutted. I should be champion.” 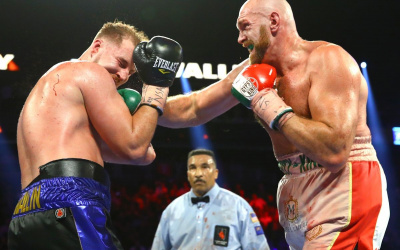