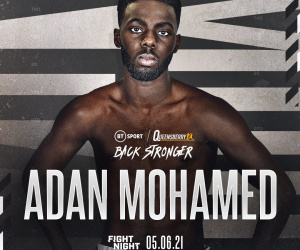 The seven-time national champion insists that sparring with Britain’s best is crucial in his development as a professional.

Adan who won 55 of 60 amateur contests has his second professional fight at Telford International Centre on Saturday June 5, when he meets Luke Fash over four rounds.

The Buckhurst Hill youngster, 19, who outpointed Brett Fidoe on his debut said: “I will spar with anyone to see where I am at.

“I have been getting some rounds in with Chris Bourke and Louie Lynn over the last couple of weeks, but I am hoping to spar with the British champion, Brad Foster.

“After my fight in Telford I am going to ask Brad if he would let me come and do some rounds with him.

“He is a really good fighter and that would be really good learning for me. He is the big boy of the division.

“I would not be going up there looking at taking his titles. By the time I get to British title level, Brad will be down a different avenue. He is already going for the European belt.

“He is ahead of me by miles. We are in two worlds and it’s unlikely we would ever fight each other because of where we are in our careers so hopefully he will be happy to spar.”

When Mohamed isn’t training at Gator ABC with trainer Donnall Smith or travelling around London gyms sparring he will sit at home studying fighters.

His idols are Sugar Ray Leonard and Pernell Whitaker, but is currently watching Tevin Farmer fights because “he has such good movement.”

Adan’s life is boxing and even when he was at Roding Valley High School in Loughton he would beg his Mum to allow him to go to the gym instead of the class room.

He explained: “I am buzzing for my second pro fight and I would be the same at school all week, thinking of the weekend and boxing. That is all my mind would think about.

“At break time I would tell all the other kids who I’d schooled at the weekend and what was happening the next weekend with my boxing.

“I used to drive them mad, but they loved it. I would keep asking them to come and watch me.

“I would wear my England vest and kit to PE. Some teachers loved it, but a couple thought I was cocky. The PE teacher loved it though because I was good at sport.

“I would be to school and then go straight to the gym. I didn’t even want to be in school. I wanted to be in the gym.

“I would nag my Mum about needing to be in the gym boxing instead of school. Mum would force me to go school.”

Daniel Dubois (15-1, 14KOs) returns to the ring on Saturday June 5 when he takes on Bogdan Dinu (20-2, 16KOs) for the WBA Interim heavyweight title. Light heavyweight favourite Tommy Fury is also in action in his sixth fight as a professional. 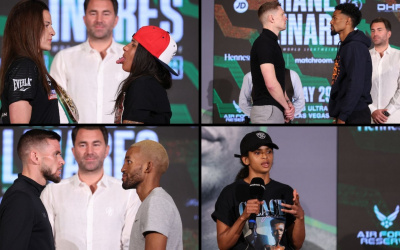