James Heneghan (5-0) believes he thrived in the brightly lit environment of making his first appearance under the Frank Warren banner a couple of weeks back.

The Mersey middleweight - although he states an intention to make it down to super welter - took himself to 5-0 in the pro ranks with a decision victory over Dwain Grant at York Hall.

However, he acknowledges that his hands-low, snappy punching style will be far more ideally suited to taking on an ambitious opponent, rather than one focused on survival and employing a high, tight guard.

That, Heneghan suspects, is when the stoppages will be added to his armoury.

"I enjoyed it," reflected the 22-year-old. "I would have liked an opponent who was more into coming forward and wanted a bit more of a fight with me, but that will come in the next few fights.

"It was different from what I've been used to, it was a lot more high production and there was all the media, weigh-ins and stuff. I am just looking forward to doing it again.

The stylish southpaw from the Wirral quite literally shoots from the hip when trading leather, a tactic less pleasing on the eye when an opponent is reluctant to return fire.

"It is definitely not," concurred the John Gillies-trained puncher who was having his first pro fight outside of Liverpool. "My style looks the most effective when people are throwing at me and I'm making them miss. When they stop throwing at me it becomes less effective and I've got to go looking for it a bit more, which I can do, but prefer not to.

"We weren't expecting it from him because he has taken rounds off good fighters and has even beaten an unbeaten one. We heard in the build-up he was coming to win so we were expecting a bit more from him, but people expect me not to hit hard because of my style and when I hit them I can see it in their faces that they are hurt and then they cover up.

"Maybe that is a factor," added Heneghan, who now wants to get cracking onto more meaningful assignments with potentially titles on the table.

"Yeah definitely, I have said from the beginning that I am not in it just to build up a record that looks good. It will be hard, tough fights that bring the best out of me and you will see how effective my style is against people who come to win.

"I think being in competitive fights is the only way to show people how good I am. What I would like is to fight people of a similar age with a similar record and I have said that from the start. I want someone who will come to fight, another good prospect."

Meanwhile, Heneghan went on to explain why the stage name of 'The Wizard' has been added to his ring moniker.

"When I first joined up with Warren Boxing Management they started calling me the 'Whizz Kid' but that one didn't stick. I've changed it to 'The Wizard' now and hopefully it is because I am doing good things in the ring, so we will see how we go." 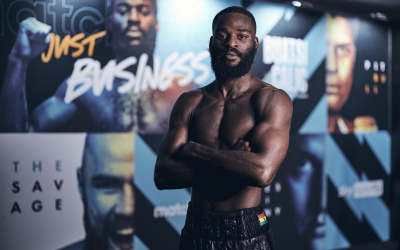