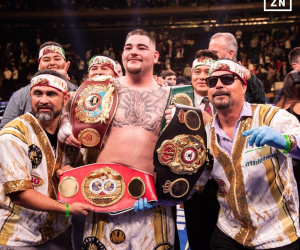 Back in June, Joe Parker's trainer Kevin Barry cleverly predicted the shock outcome of the first Ruiz-Joshua fight, which nobody expected.

Unheralded outsider, Andy Ruiz Jr, who had stepped in at the last minute to replace drug cheat Jarrell Miller, stopped reigning unified heavyweight world champion Anthony Joshua in seven rounds in one of the biggest upsets in heavyweight boxing history.

Having witnessed his heavyweight charge defeat Ruiz Jr in December 2016 by two points (on two of the judges' scorecards, the third called a draw) to land the vacant WBO belt, and then seeing his student lose that title two years on to Anthony Joshua in March 2018, the boxing coach was in a better position than most to offer insight.

A former Olympic silver medalist in 1984, Barry had foreseen the shock defeat, "Andy [Ruiz Jr] was coming off the plane, an overweight, short guy. I spent two weeks trying to convince the public that this was a fight against one of the toughest, most battle-hardened fighters at heavyweight."

Despite this attempt, nearly everyone had written the portly pugilist off completely.

"You take the mask aside - and by mask I mean the extra weight - and you have a man who was a good amateur and a man I've watched chop down big guys time and again."

It's not just Barry who speaks highly of the Mexican-American, his boxer Joe Parker also agrees and is even more qualified to give feedback having spent 36 hard minutes trading punches with the guy.

"I took Parker to fight Joshua in Cardiff in 2018, so I had a front-row insight into that too. Parker has told me the hardest he has ever been hit was by Ruiz.

"I kept thinking about that and Ruiz had just been written off. So I made my opinion known."

Six months on and the heavyweights will meet once more, six and half thousand miles away from NY, this time in one of the most eagerly-anticipated bouts in boxing history; quite different from their first meeting when Ruiz was so badly discredited before even a single punch was thrown.

"Ruiz has the belts and everyone says once you become champion you're 10% better and I think that is fair statement," continued Barry.

"But I think Joshua will fight a totally different fight. When he had Ruiz down, all he had to do was take his time but he ran in with the wrong punches and put himself there to be hurt.

"This time we will see more poise. If he uses his skills and controls the pressure, I think Joshua wins the fight."

Champion Ruiz and challenger Joshua are set to make their ringwalks between 8:30pm and 9pm this Saturday night - full details of how to watch the fight HERE

7 Tips from Boxing Pros to Become a Better Fighter

Ruiz-Joshua undercard quotes: "Whoever wants it can get it!" - Dillian Whyte is raring to go against Mariusz Wach