Boardwalk Boxing is back!

The Jersey Shore heats up on Saturday, July 31, as FloSports FIGHTNIGHT LIVE returns to carry an action-packed Hard Hitting Promotions card live from the boardwalk in the historic Fight Capital of Atlantic City. Ten big bouts featuring the hottest prospects from Puerto Rico, Philadelphia and The Garden State air via FloCombat from the Showboat Hotel beginning at 7 p.m. – an outstanding treat for fight fans everywhere as Summer 2021 continues to sizzle.

“Every time we’re able to participate in an Atlantic City show is special, and we’re particularly excited to help usher in a new era and new series with Hard Hitting Promotions at The Showboat,” said Mark Fratto, Principal and Director of Business Development, Linacre Media. “The history and pageantry is something we try to capture every time we’re on the boardwalk. The great Chick Hernandez and our favorite unified world champion, Franchon Crews-Dezurn will be on-hand to deliver a nine-fight card of up-and-coming warriors.”

As part of FIGHTNIGHT LIVE’s blockbuster multi-event deal with FloSports, the 7 p.m. card featuring 10 scheduled bouts will air exclusively on FloCombat. FIGHTNIGHT LIVE plans to deliver two shows per month – 24 boxing and MMA cards per year – via the subscription-based FloSports platform. Fight fans can witness every explosive knockout and drama-dripped decision from regional rising stars – as well as the 10,000-plus events streamed annually by FloSports via the web, the FloSports mobile app (iOS and Android), or connected TV platforms such as AppleTV, Roku, FireTV, Vizio and others – for as little as $12.50 per month. Fight fans can subscribe with a monthly or annual membership today at https://www.flocombat.com/ to be ready for a full slate of FIGHTNIGHT LIVE events in 2021-22.

“This is just a small piece of what is going to happen in Atlantic City. This has been a vision for the last three and a half years. What we will be doing is putting on great fights and high quality events, and we can see this as the start of bringing big time boxing in Atlantic City like it used be,” said Manny Rivera, Partner with Hard Hitting Promotions, of the new 12-event Showboat series. “You can see what we are trying to do in our first event, by having excellent fights with all of the fighters getting tested in real fights.”

A ten-round tilt for the vacant WBA-NABA super featherweight title will serve as the main event on the boardwalk, headlined by undefeated Puerto Rican sensation Christian “El Hijo Del Pueblo” Tapia (11-0, 10 KOs), who has amassed 10 stoppages among his 11 career victories. His toughest test to date comes with this title matchup against veteran power puncher Mason “Rock Hard, Mighty” Menard (36-5, 25 KOs) of Rayne, La. 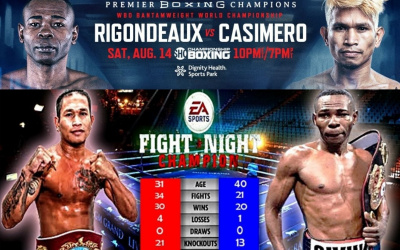