Venue for Dubois vs Joyce and Yarde vs Arthur revealed

Hall-Of-Fame Promoter Frank Warren will celebrate 40 years in professional boxing by bringing two of biggest domestic battles of the year right into the heart of Central London.

Dubois vs Joyce (28th Nov) and Yarde vs Arthur (5th Dec) will take place at the majestic Church House, in view of the world famous Westminster Abbey.

Church House was founded in 1887 and was built to commemorate the Golden Jubilee of Queen Victoria. The current building was designed by the renowned architect Sir Herbert Baker and the foundation stone was laid by Her Majesty, Queen Mary on 26 June 1937. It took until 1940 to complete and was officially opened by His Majesty, King George VI on 10th June 1940.

The building suffered a direct hit in the early part of WWII but due to its exceptional construction only minimal damage was done. The Prime Minister of the day, Winston Churchill, was so impressed by this that the building was refurbished for use by the two Houses of Parliament for the remainder of the war.

Many historic speeches and events took place within the building during this time, in particular the announcement by Churchill from the stage of the Hoare Memorial Hall of the sinking of the battleship Bismarck.

In 1945, the first meetings of the United Nations Preparatory Commission and Security Council were held in the Hoare Memorial Hall.

Frank Warren said: “I’m delighted to be able to confirm such a spectacular venue to host two weeks of fantastic big time boxing. It’ll be a more than fitting way to celebrate my forty years in professional boxing.

“Both these bouts are going to be battles for the history books, so it makes sense they’d take place in a venue so rich in history.

“Winston Churchill announced the sinking of the Bismarck inside this venue, and soon we’ll know who out of Dubois, Joyce, Yarde and Arthur will sink or swim.”

Church House Westminster is a Grade-II listed multi-purpose event and conference venue uniquely located in tranquil Dean’s Yard. Most of its 19 flexible event spaces offer stunning views of Westminster Abbey. The dedicated team are consistently recognised by the BDRC Gold Standard for their commitment to service excellence throughout all areas. The conference and event spaces are equipped with the latest technology, supported by the venue’s own in-house, award-winning Audio-Visual team. 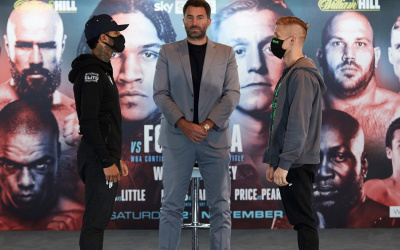 Conor Benn vs Sebastian Formella press conference quotes: "I'm here to prove that I am a contender", says Benn